Welcome to 2015. The graphic below is an IRS form 8965 “Health Coverage Exemptions”. Aside from the trite question of why we need 8,965 forms to file taxes, this hurts me for deeper reasons. 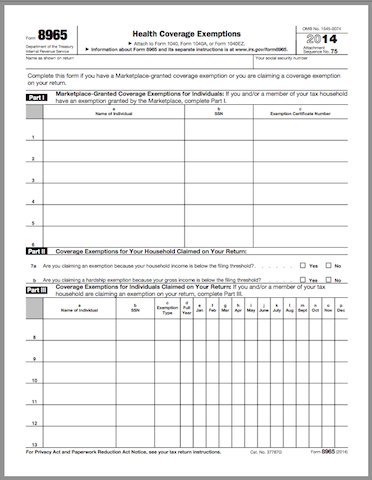 Now, to simply do what I want (like buy insurance or not) in an innocent way, not connected to anybody else or hurting anybody else, I have to have an exemption or exception granted by the government. I feel like I’m begging for dispensation from God. We have changed. We are no longer a nation of the Free.

I’m offended that even the words are redefined. Check the definition of insurance. It has traditionally meant, “a thing providing protection against a possible eventuality” but has now drifted to include the certainty of illness or health care costs. Insurance now means coverage for what WILL be, not what MIGHT be.  Socialism hides under a free market word.

I am aware of the tangential argument that I *am* connected to the rest of people because free medical bills are paid by other citizens’ taxes. My response to that argument?   “No! Foul! Doesn’t count. That is a self-recursive argument.”

This argument is self-recursive because the rule that anybody’s money is taken for this purpose is ALSO an ab inito government power play. If the government makes a law that forces the outcome that they get to make another rule or controlling dispensation, the system has become a self-creating purpose to exist.  (And, BTW, taxing people IS the reason the second law gets to exist – as expounded by the Supreme Court when the government had to argue that this penalty was really a tax – a short time after they argued to the public that the health care law would implement no new taxes.  As a intellectual exercise, in a period of quiet and honest Zen-like reflection, ask yourself, “What is the difference between a tax and penalty?”)

A self-creating purpose to exist in a government is an anathema to the intent of the Constitution of the United States.