Einstein, Oscillations, and the Stock Market

Robert Wiedemer wrote recently about how gold is de-coupling from the Dow.  What does this mean?  His interpretation is that gold is finally being seen as a legitimate investment:

I read more into this decoupling. Think of the dollar, the Dow, and gold as a triad.

Typically, the American mind is grounded in dollars and therefore talks of the price of gold changing and the price of the Dow changing. Think broader. For example, physicists thought of mass moving around in space, and measured all this activity with time. Einstein was the first physicist to bring time into the mix as a peer parameter.

In terms of macroeconomics, American’s tend to think of dollars as their “electrical ground” – against which to measure all other financial movement.  Others have been able to speak of gold as some sort of “true ground” against which to measure others.  Perhaps it’s time to bring them all into the mix as peer parameters.  Actually, this is the deletion of any absolute standard. Much to his chagrine, Einstein’s move matured 15 years later to remove any sense of causality from fundamental physics. The next big Economic theory will be to remove any sense of absolute.

Since it’s inception in 1913, the American Federal Reserve bank has been chartered to control dollar stability and encourage employment.  But when you have inherent oscillation in the system (such as the confidence and independence of each new population generation) in the psychology of a culture, ~something~ is going to oscillate.  If the Fed Reserve won’t let the value of a dollar oscillate, something else will.  Consider the differential between Dow and gold, specifically the Dow-to-gold ratio. 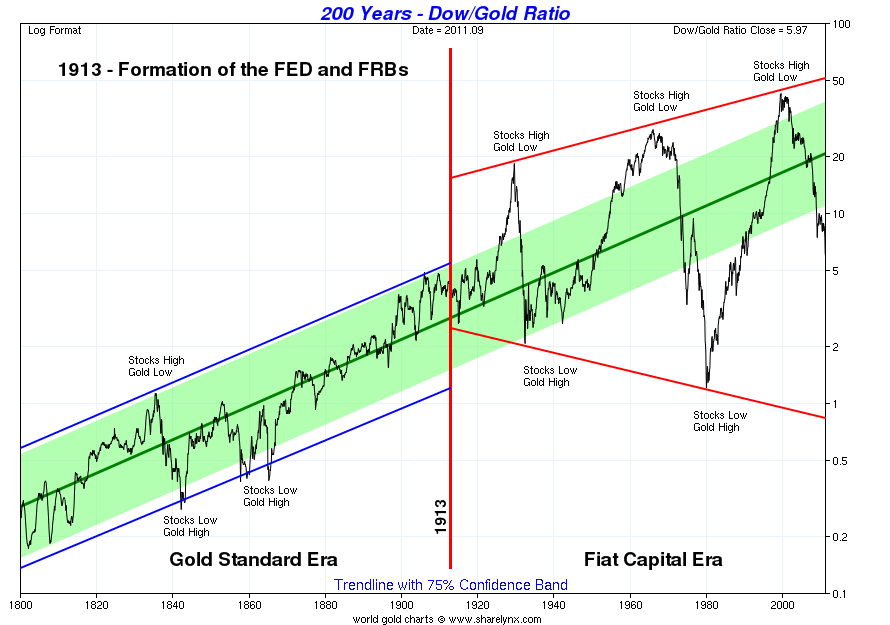 To the scientist, this type of “ratio plot” just a change of units: instead of “shares per dollar”, we shift to “shares per ozGold”.    To the financier, I would propose to think of gold as the grounded value (instead of dollars) and consider how the Dow and dollar move against this new horizontal axes on the charts.  Perhaps you’ll see some clarity in the above chart that is not visible on a Dow v. dollar or gold v. dollar chart. Do you see the oscillations? 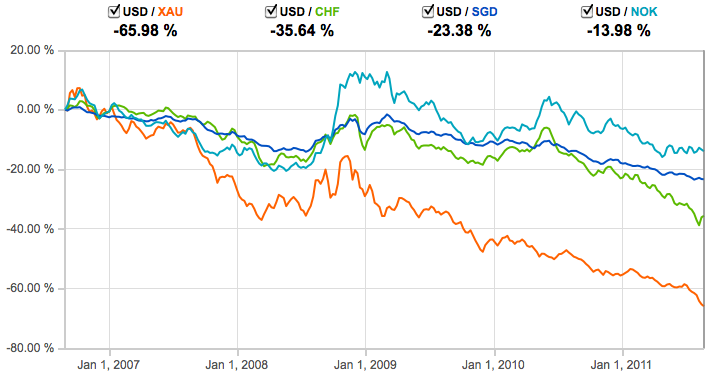 From 2009 through end of 2011, both Dow and gold drifted upward at similar slopes on a logarithmic graph – in other words, returns were similar against the dollar.  Perhaps it was the dollar value decreasing.  In fact, the Fed Reserve had the power to cause this, and did so,  by driving down the value of the dollar.  This is not their mistake.  You need to understand that this is their purpose and intent. Whether or not this is driven by the political environment, you’ll have to decide on your own.

As I’m writing this, end of August of 2011, notice that the Dow is going down while gold is going up. Can a change in dollar value explain this? No.  It is a shift of sentiment, and sentiment cannot be controlled by any fiscal or monetary policy of a nation.  When the Dow and gold diverge or de-couple, what does this mean?

Maybe gold-Dow de-coupling is less about gold becoming a commodity traded investment and more about the dollar adjustments no longer have flex room. In other words, the Federal Reserve board cannot accomplish their goal anymore because their tools of increasing debt supply or money supply are maxed out. The dollar becomes a fixed pivotal value point that cannot move in value because the Federal Reserve that has no more power to move the dollar one way or the other with money supply or interest rate. The Dow and gold/other currencies behave like a teeter-totter around the dollar value.