Donald Trump Accepts Gold Instead of US Dollars

Trump is quoted saying, “The economy is bad, and Obama’s not protecting the dollar at all. . . . If I do this, other people are going to start doing it, and maybe we’ll see some changes.” He’s right. Be scared.

Everybody tends to center attention on the requirement for citizens to turn in gold. However, if you study the overall economic situation at the time, you’ll see that the foundational issue was to stop business transactions being done in gold. The Gold Repeal Joint Resolution of 1933 made unlawful any contracts that specified payment in a fixed amount of money or a fixed amount of gold. That is, contracts remained unenforceable if they used gold monetarily rather than as a commodity of trade. This restriction in contract law was removed in 1977, so I guess Trump is good to go.

I’m intrigued by Trump’s ideas as he rampages against Obama’s ineptness. I’m not sure Trump even really disagrees with Obama, it’s just that Obama doesn’t seem intellectually capable of thinking or visioning beyond a 3-month stump speech. If Trump’s idea spreads, I guarantee you the United States will step in to prevent rampant use of gold as an alternate currency. 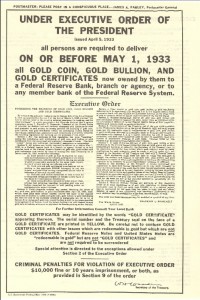