I had an hour to read the 30 July issue of the Wall Street Journal today. I know what I’m going to say isn’t a popular position, but I’ve decided it’s time that our nation should be confronted with default.

Our leaders should be forced to spend money not to exceed what they have coming in. We won’t default on what we owe, but we’ll definitely have to stop spending in a lot of other areas. The two significant “debt recovery” plans going around Washington these days are weak. At the rate of recovery proposed, it will take 150 years close the deficit gap. Although your parents allowed our society to get so far into debt you don’t know what to do, perhaps you will leave something better for your children.

I’ve decided that we’ve become too much a pampered nation of getting everything we want.  A lot of the articles I read had to do with unemployment catastrophe that has settled over America. One article after the other left me with the impression that we’re doing it to ourselves.

Right to life, liberty, pursuit of happiness? Somewhere along the line, it became, “right to a job, no relocation (unless I want to, and then that’s my right), 2 cars, 3000 sq ft home, cell phones for all family members, benefits, and retirement.

I’ve moved across the nation more than a half-dozen times to pursue work. One time, I couldn’t sell a house and didn’t have a job. When a job across the nation was offered, the whole family moved. No, I did not default on the loan. I sold the house after 2 years of paying double mortgages.  We did without. Another time I had to take a 50% cut in pay and landed in a situation where my expenses were 100% higher. Net result was I had to live on 25% of my prior income. When I did contracting work, I had no benefits, so I bought my own insurance or paid out of my pocket.

BTW, when did insurance become a plan to have everything paid for? Wasn’t it to insure against catastrophic problems? These days, we seem to be drifting to socialized coverage of everything. If you think the government will pay for it, ask yourself where the government gets money.  They get money from you and from businesses.  Where do businesses get money? They get money from you.  Instead of looking for someone else to pay your bill with money laundered through multiple layers of beauracracy, I bet you could lower your policy premiums if you didn’t didn’t have such a low deductible and generous coverage.

What did I do in each of the situations my life presented? I cut back expenses until…(no magic here)…my spending was reduced to my revenue. It’s good to live light even between rough times, which allows you to save money to make the next rough time, well, ..less rough.  The problem is, most people in America are loathe to cut anything they’ve become used to in bad times or good times. Said a different way, what I mean by “cut back expenses” includes the possibility that you DON’T get what you want, and that will give you good practice to restrain spending when you can get what you want.

I’ve decided it’s time that our nation should be confronted with default so our leaders are forced to spend money not to exceed revenue. We need to toughen up and realize that we cannot have everything we want. 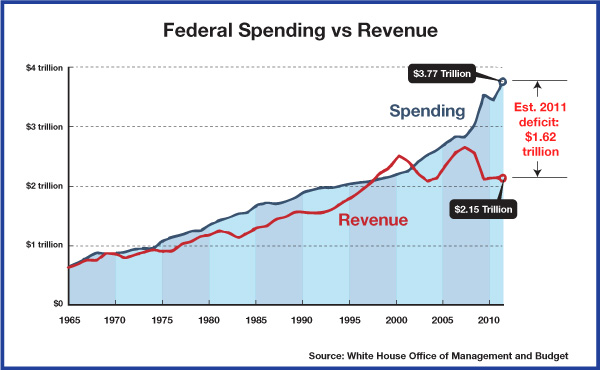 The above graph shows the deficit each year. That’s not cumulative debt. This shows the amount more we go into debt each year. And remember, we have to keep paying interest on last years’ debt, which makes next year’s problem even harder to get out of. 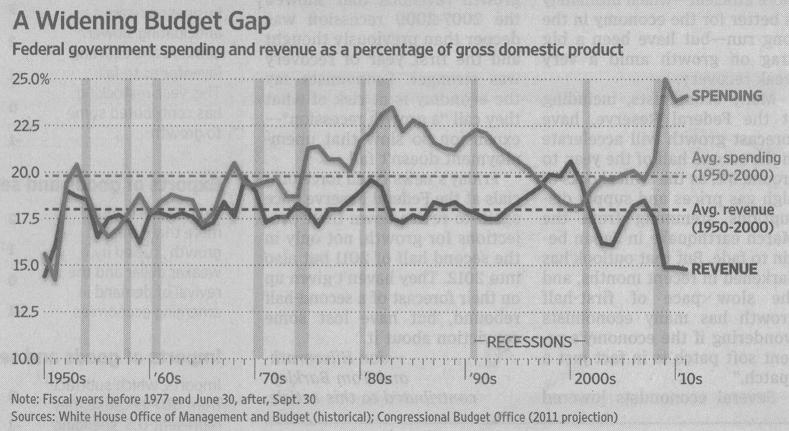